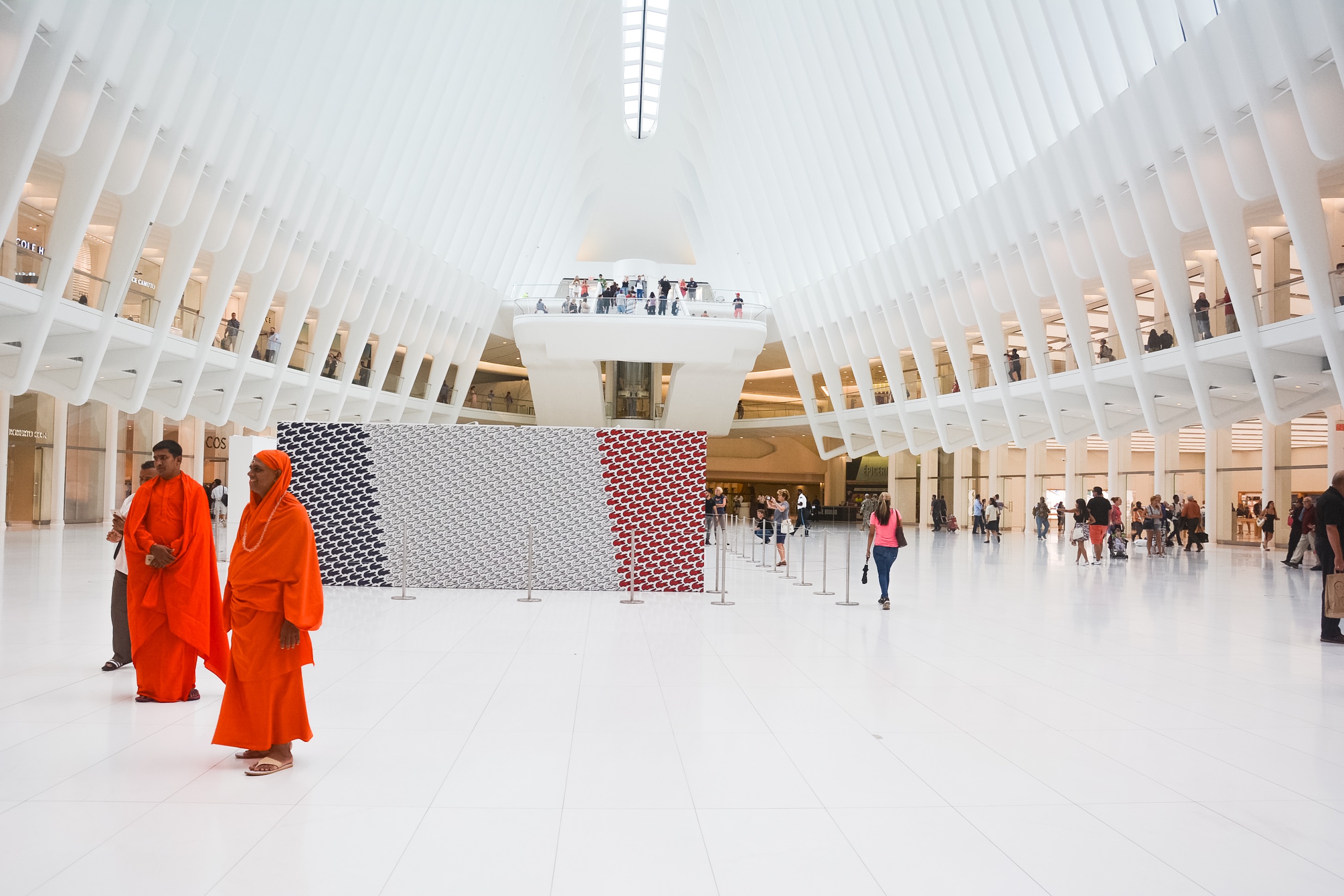 Yes, it’s cold in the winter, too hot in the summer, and undeniably grimy year-round but I truly believe the MTA subway system is an off-beat New York attraction in its own right. A microcosm of the city, it condenses the vastness of the Big Apple’s diversity into its stations and subway cars for fleeting moments at a time. Within the few second it takes to move from one stop to the next, there are so many stories, so many emotions, so many agendas, all in the same car, on the same train, heading in so many different directions it’s impossible to know where anyone’s journey began or will end.

Beyond the cars and the people however, I have always been fascinated by the stations that facilitate the transportation process. Even with all their grit, beautiful designs shine through, and there are a few of these hubs that I think are worth a visit beyond the purpose of getting you from point A to point B.

Representing both the past and the present, the vintage and the modern, the intricate and the sleek, here are my five favorite subway stations out of the 469 (at last count) that comprise the complicated, mysterious, efficient and largest rapid transit system in the world. 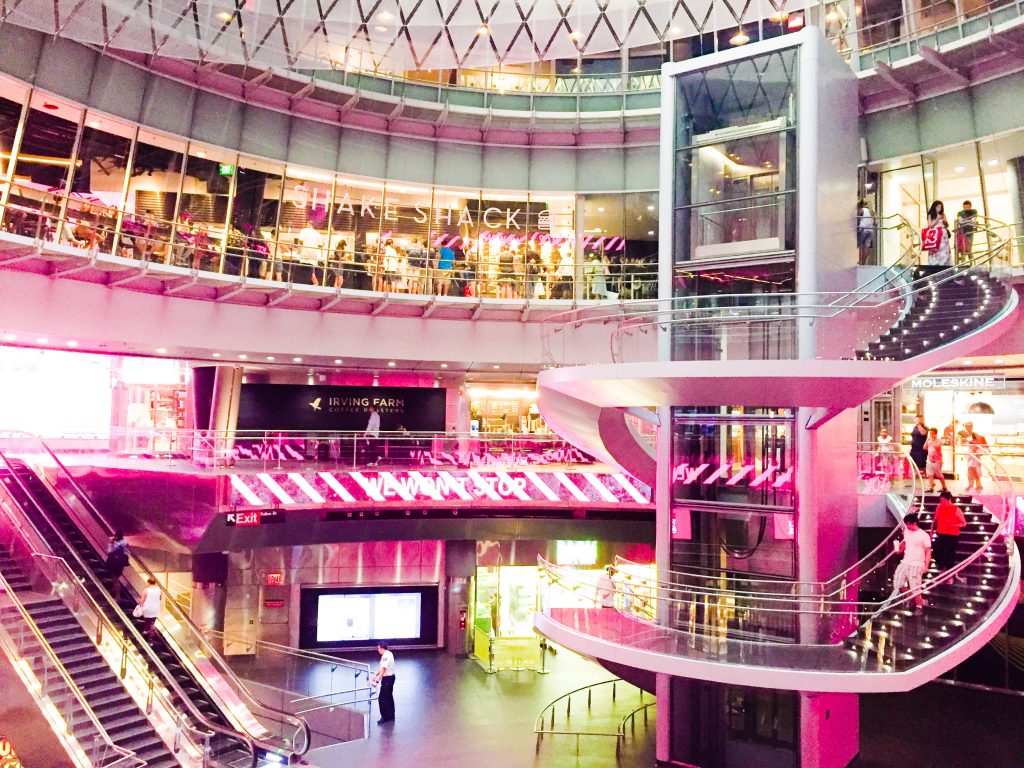 All glass walls and metal accents, the Fulton Center station is Apple meets MTA. The chic station in Downtown Manhattan includes trendy stores and restaurants, making it more than just another stop on the train line. While I consider myself a traditionalist who prefers tiled mosaics over modern art, I admit I was impressed by the futuristic design. It also gets points for the massive Shake Shack with views of the city streets and the station’s fascinating interior. Plus, there’s FREE WIFI! 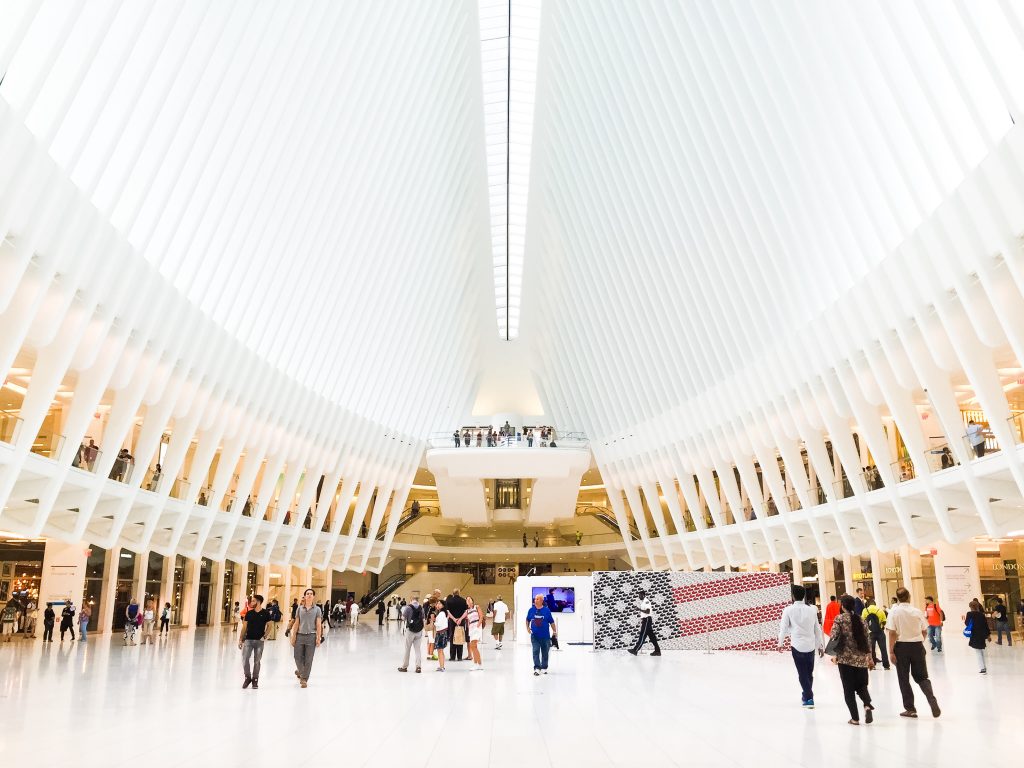 At the center of the Westfield World Trade Center is Lower Manhattan’s newest pride of joy – The Oculus. Sleek and almost blindingly white, it was designed by Spanish architect, Santiago Calatrava. The exterior is meant to reflect the image of a dove being released from a child’s hands, while the central skylight was strategically positioned to allow the shaft of light shining through it every September 11 to bisect the floor. It inspires awe, demands respect and serves as a reverent reminder of the tragedy that resulted in its existence. If you’re big on shopping, you can patronize any of the stores in the station, from Hugo Boss to Apple. If not, spend your time like so many others, staring up and around at the facility’s many interesting details. 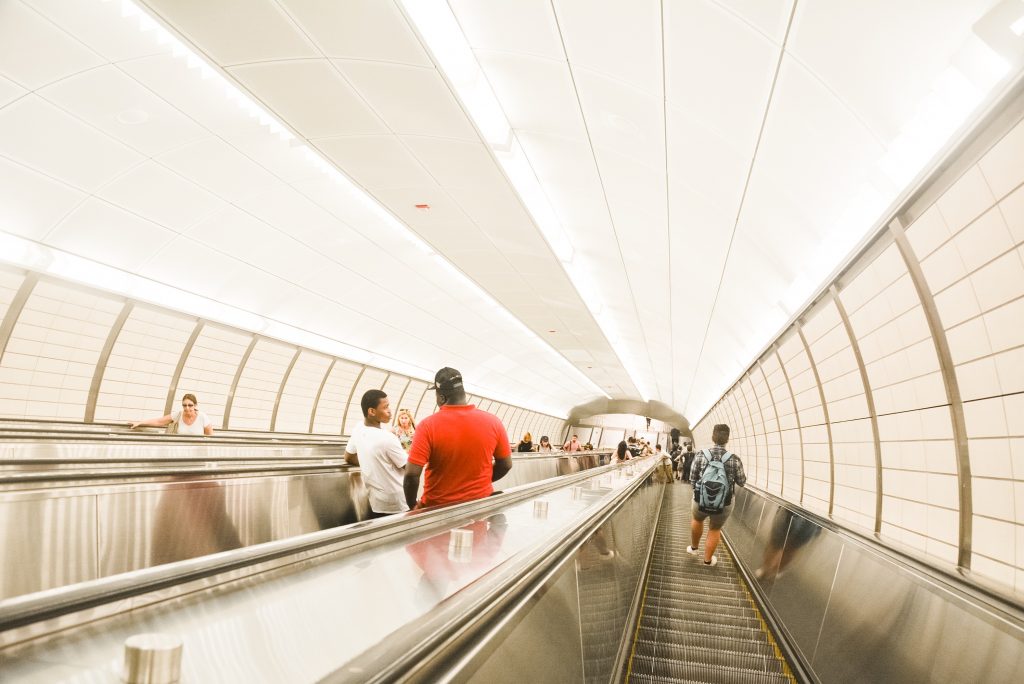 A block from the High Line is a station with escalators that double as slow but invigorating theme park rides. The 34th Hudson Park station is 125 ft below street level, 108 ft below sea level, and the 3rd deepest station in the entire transit system. Even more fascinating to me than its beautifully designed exterior and the gorgeous mosaic tile work throughout the interior, is the 172 ft long incline escalators that deliver you into the bowels of the station. If you suffer from vertigo this might not be ideal for you, but if you can handle it, I highly recommend riding one just for fun. At first I was a bit freaked out, but by the time we made it 1/3 of the way down, it felt as if we were flat and the station was titled! 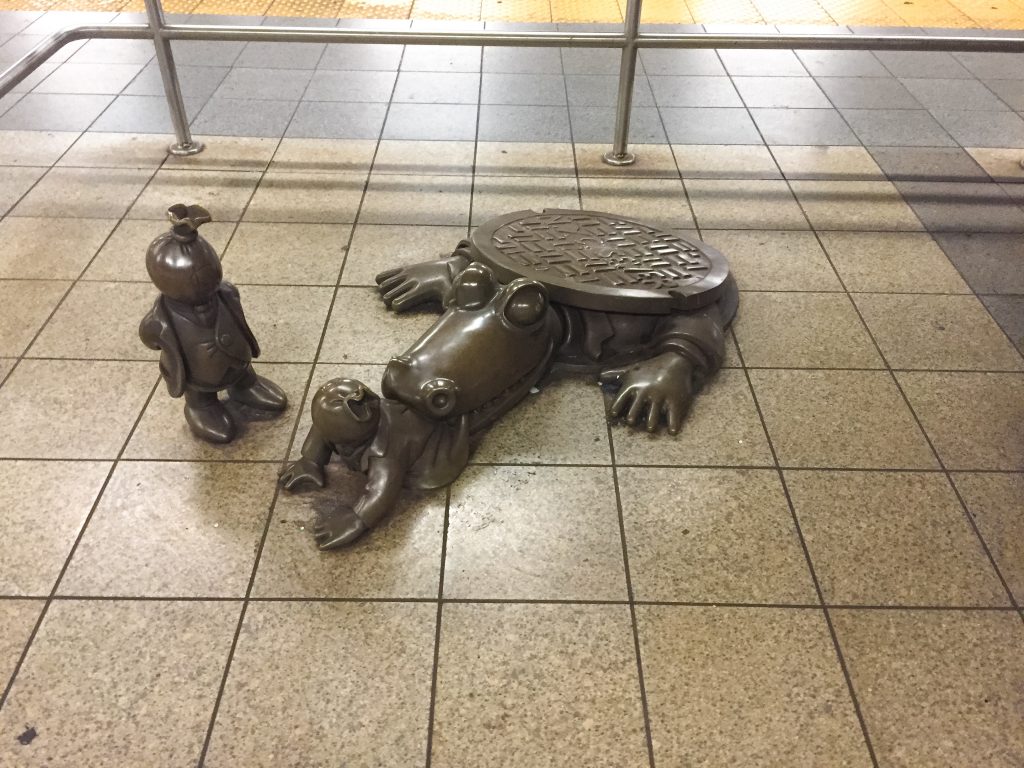 If you’ve never heard about the Life Underground installations by artist, Tom Otterness, you need to right that wrong. I have been obsessed with these adorable sculptures, arbitrarily placed throughout the 14th Street and 8 Ave station, since I discovered them almost a decade ago and I think it’s a shame to visit New York, ride the subway, and not glimpse at least one of them. If you have the time, I strongly recommend taking a stroll around the station to see how many of these you can spot. My absolute favorite is the alligator emerging from the manhole and biting into the poor passerby under the stairs on the A C E platform.

When it comes to New York stations, nothing is grander than Grand Central. It’s one of those iconic spots that is actually worth the fuss. A work of art, Grand Central captures the romance, endurance and magic of one of the greatest cities on earth. Visit only when you have some time on your hands because patience is required to capture that perfect shot from the very center of either of the landings leading to the east and west balconies. Once that’s checked off your must-do list, take a stroll past the vintage four-faced clock and ticket booths all the way down to the famous Secret Whispering Spot, where you can exchange softly spoken words with friends from opposite ends of the passageway.

Nearby attractions: Apple Store, NY Public Library, Shake Shack and other options in the Dining hall

Are you a fan of NYC subway stations like me? If so, where are you favorite underground spots? 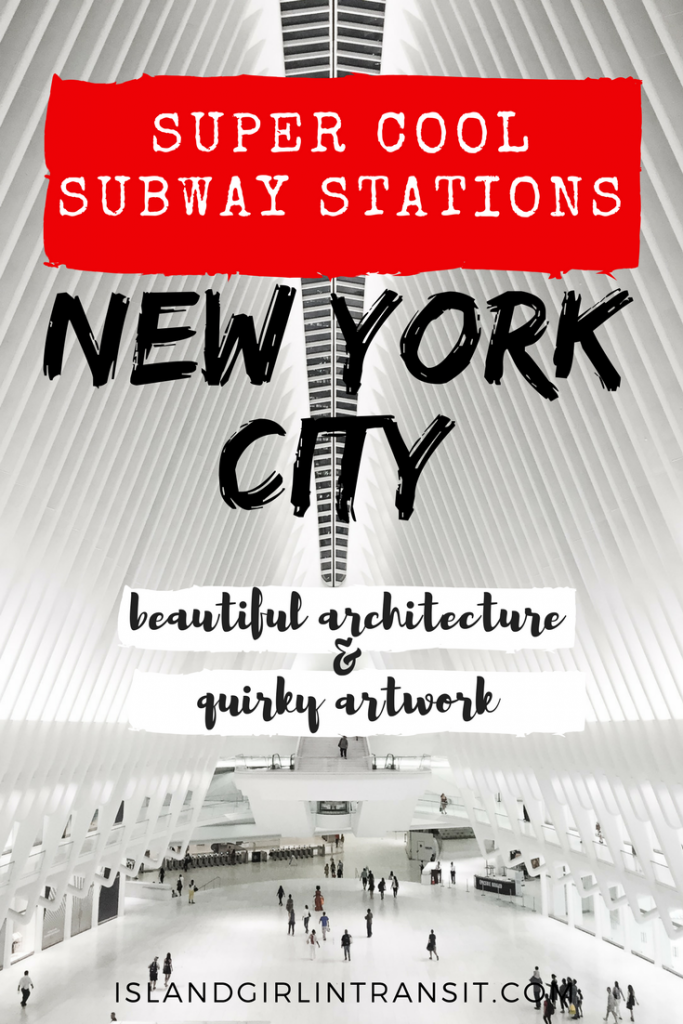 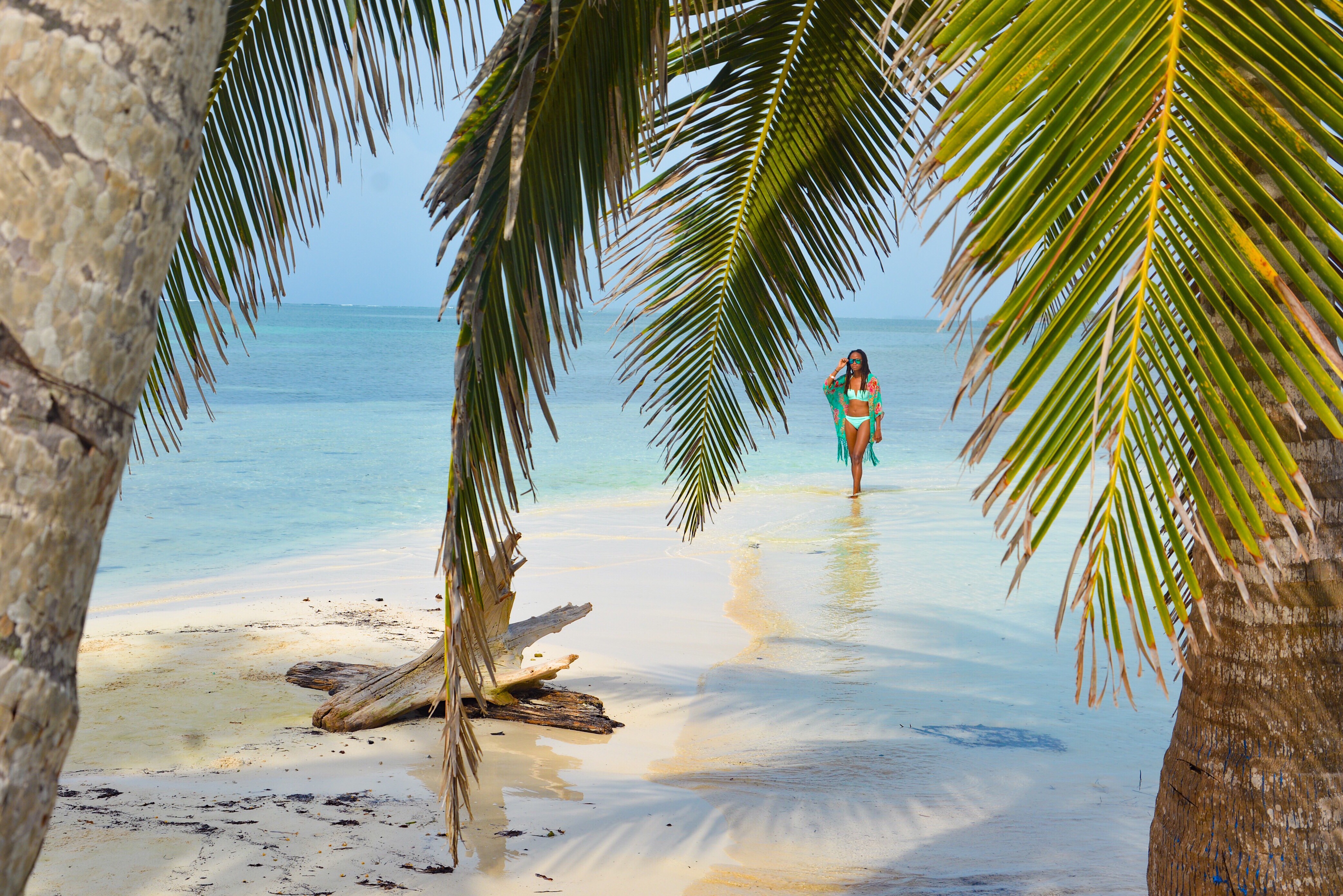